10 Mar Unemployment falls back to 3.5% as job growth smashes expectations for February

Posted at 08:39h in latest news by Admin
Share

The Labor Department reported Friday that the U.S. economy added 273,000 new jobs during the month, while the unemployment rate was 3.5%, matching its lowest level in more than 50 years. An alternative measure of joblessness that counts those not looking for work and holding part-time jobs for economic reasons edged higher to 7%.

The January and February gains tied for best month since May 2018.

Economists surveyed by Dow Jones had been looking for payroll growth of 175,000 and a 3.5% jobless level. Average hourly earnings grew by 3% over the past year, in line with estimates, while the average work week, considered a key measure of productivity, nudged up to 34.4 hours.

Despite the strong numbers, Wall Street was heading for more losses stemming from worries over the effects of the coronoavirus outbreak, though Friday’s futures were off their bottom after the report. 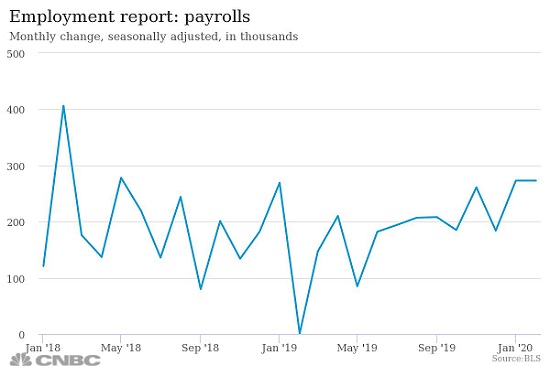 “This could be the last perfect employment report the market gets for some time,” said Chris Rupkey, chief financial economist at MUFG Union Bank.

Gains were spread across a multitude of sectors as the total employment level hit 158.8 million, near its December 2019 record.

Health care and social assistance led the way in job creation with 57,000 new positions. Food services and drinking places both added 53,000 while government employment grew by 45,000 due to Census hiring and state government education. Construction added 42,000 thanks to continued mild weather, while professional and technical services contributed 32,000 and finance rose by 26,000, part of a 160,000 gain over the past 12 months.

In the survey of households, employment rose by 126,000 while the ranks of the unemployed decreased by 105,000.

“While it’s too early to see the impact of the coronavirus on the labor market, we can say the labor market was in a good place before the virus began to spread,” said Nick Bunker, economic research director at job placement firm Indeed. “But the next few months will be a test of just how resilient this labor market is.”

The jobs numbers took on particular importance in February as worries intensified over the economic impact from the novel coronavirus, though the report covered the time frame before worries over the disease intensified.

“Now more than ever, we need to focus on the labor market data,” said Liz Ann Sonders, chief investment strategist at Charles Schwab. “The consumer has kind of kept things afloat.”

Most of the consumer-related data points have been good, though the reports coming in now largely cover the early stages of the coronavirus scare and the sharp recent stock market volatility.

With the large measure of uncertainty around the disease, its impacts may be felt in increments rather than suddenly. But if cracks begin to form, the first notices likely will come in employment data.

“If we start to handle things the way they’re handled in Italy and South Korea, closing schools and having mandated cancellations of travel and sporting events, I think there’s no way we don’t start to see it in the labor market and in consumer confidence and spending,” Sonders said.