03 May LA TIMES: Washington farmers and a billion pounds of potatoes

The notice on Facebook was small and nondescript: “Free potatoes donated by Washington Potato Growers.” But that’s all it took.

Farmer Marvin Wollman had filled a tractor-trailer with 40,000 pounds of russet potatoes packed into 15-pound bags, and they were gone in nearly three hours.

The next day, Wollman brought another 40,000-pound load to the city of Moses Lake, and the line of cars stretched 2½ miles.

Wollman was moved by the response, but this was much more than charity.

The coronavirus pandemic has left Washington’s farmers with at least a billion pounds of potatoes they can’t sell, a new crop growing without any buyers and millions of dollars in debt they have no way to pay.

The state’s fertile Columbia Basin produces nearly a quarter of the potatoes grown in the United States, 10 billion pounds in 2019. The vast majority — 90% — were turned into frozen French fries and shipped to restaurants, some in the United States but mostly to Asia. 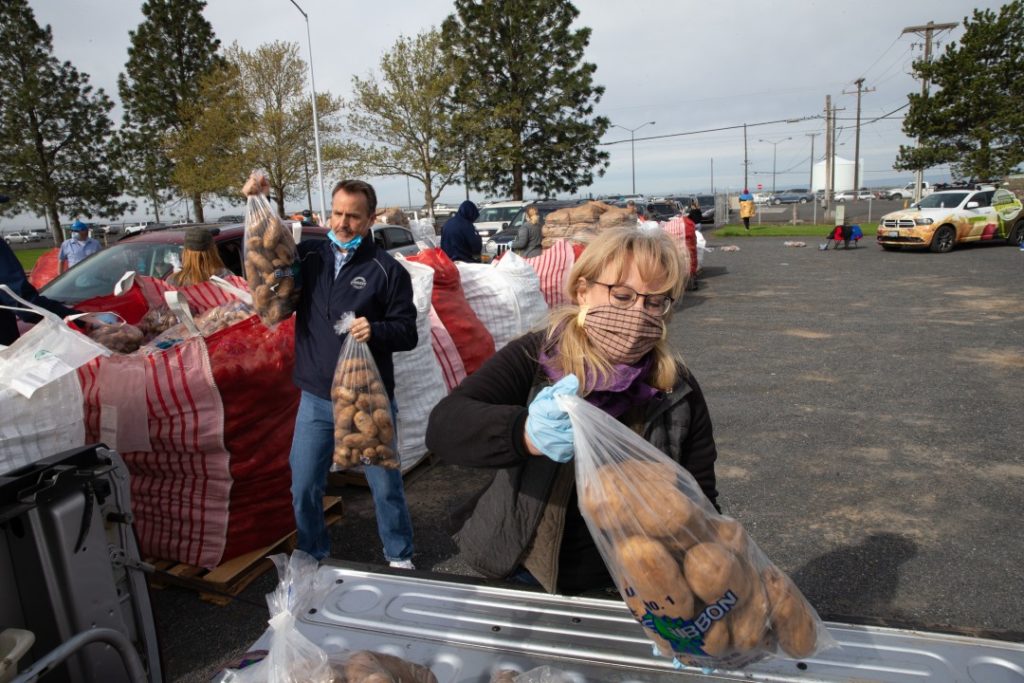 Chris Voigt, executive director of the Washington State Potato Commission, and Washington state Rep. Mary Dye (R-Pomeroy) load up a pickup truck during a free potato giveaway at the Grant County Fairgrounds in Moses Lake, Wash..(Karen Ducey / For The Times)

Demand has increased steadily since 2008, said Chris Voigt, executive director of the Washington State Potato Commission, and last year the region’s processors had more orders than spuds. This year was shaping up to be the same until the coronavirus closed restaurants and schools around the globe.

Normally, Wollman’s storage sheds would be nearly empty this time of year, but more than half his potatoes — “Let’s just say millions of pounds” — are still piled high in the cavernous buildings, which are roughly the size of a football field with roofs nearly 30 feet high.

“We’re afraid there’s still going to be potatoes in storage when we go to dig up this year’s crop in September,” Wollman said. “These are good potatoes. We don’t want to throw them away. It’s just, what do you do with them?”

As it turns out, getting rid of a billion pounds of spuds isn’t easy — or cheap. It usually takes Washington farmers a year to sell that quantity to grocery stores.

“Now we’re trying to move it in a couple months,” Voigt said.

That means each of the 2 million citizens expected to use the state’s food banks this year would have to take 500 pounds.

And moving all those potatoes would require filling at least 20,000 tractor-trailers — and paying for fuel. 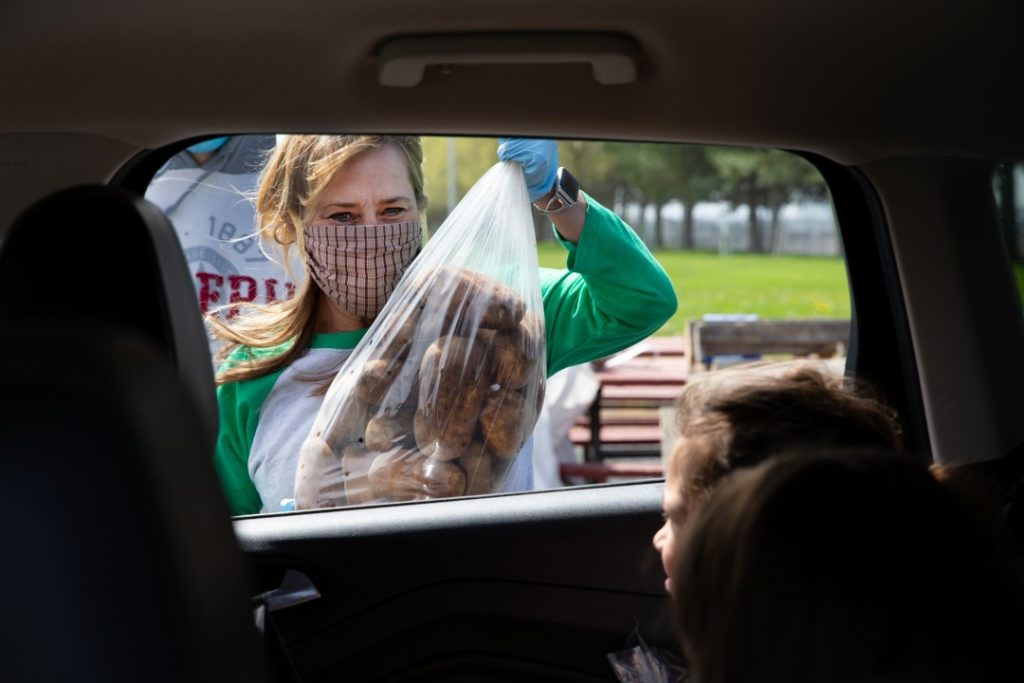 Angie Griffith gives away 15-pound bags of potatoes — two bags per family — during a free potato event at the Grant County Fairgrounds in Moses Lake, Wash. (Karen Ducey / For The Times)

The potato commission helped cover the cost of bagging and transporting Wollman’s potatoes — about 7 cents a bag — to see what was possible. Voigt said it has also started a GoFundMe page to raise $100,000 to cover the costs of giving away another million pounds of potatoes around the state over the next few weeks.

That would still leave more than 999 million pounds in storage.

The concrete floors inside a potato shed are studded with slits to help cool air rise from the ground to keep the spuds at an optimal 47 degrees. Stored at that temperature, potatoes remain unspoiled for nearly a year. 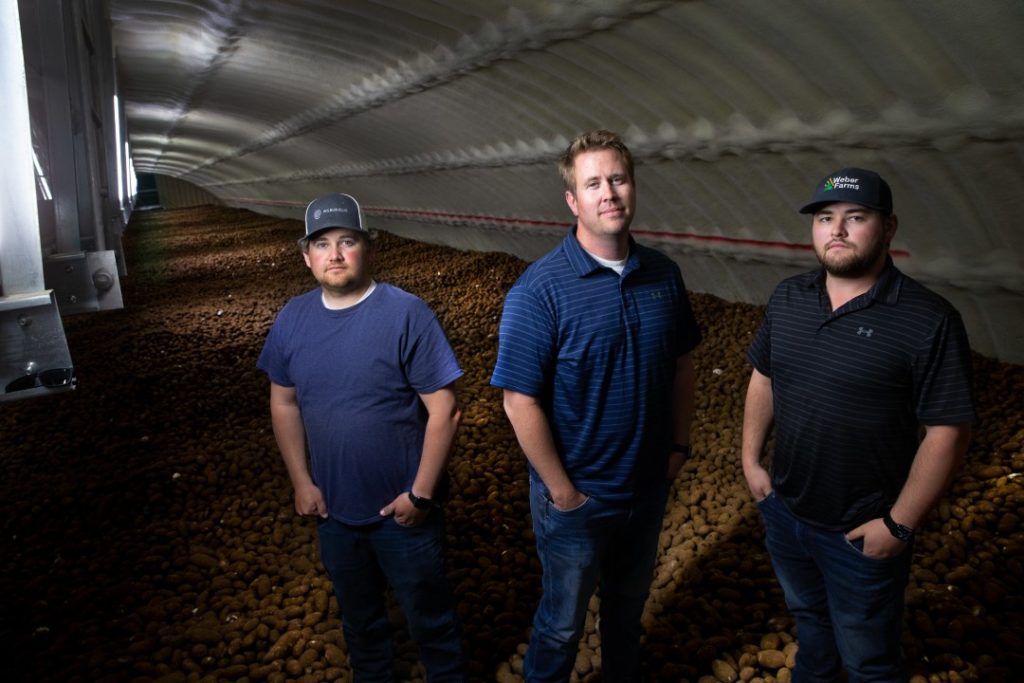 Weber Family Farms members and managers Deven Johnson, left, Josh Lyebert and Adam Weber stand on $1.1 million worth of ready-to-eat russet potatoes in one of the company’s refrigerated storage bays in Quincy, Wash. (Karen Ducey / For The Times)

But the clock is ticking and farmers are facing a similar plight as COVID-19 and the closure of schools and restaurants has kinked food distribution lines all over the country.

Congress recently approved $9.5 billion for the Coronavirus Food Assistance Program to help farmers with crops they can’t sell. The maximum relief for single-commodity farmers is $125,000, but most borrow millions each year to cover their costs until their crop can be sold.

Schrier said she couldn’t answer whether that was likely.

“I think we have to expand that question to whether the USDA will buy up all the tomatoes or apples or carrots farmers can’t sell around the country, because they’re all hurting,” she said.

“Just in Washington state, we grow other things too, like apples and cherries. We’re afraid a third of our farms could go out of business. It’s a heartbreaking situation.“ 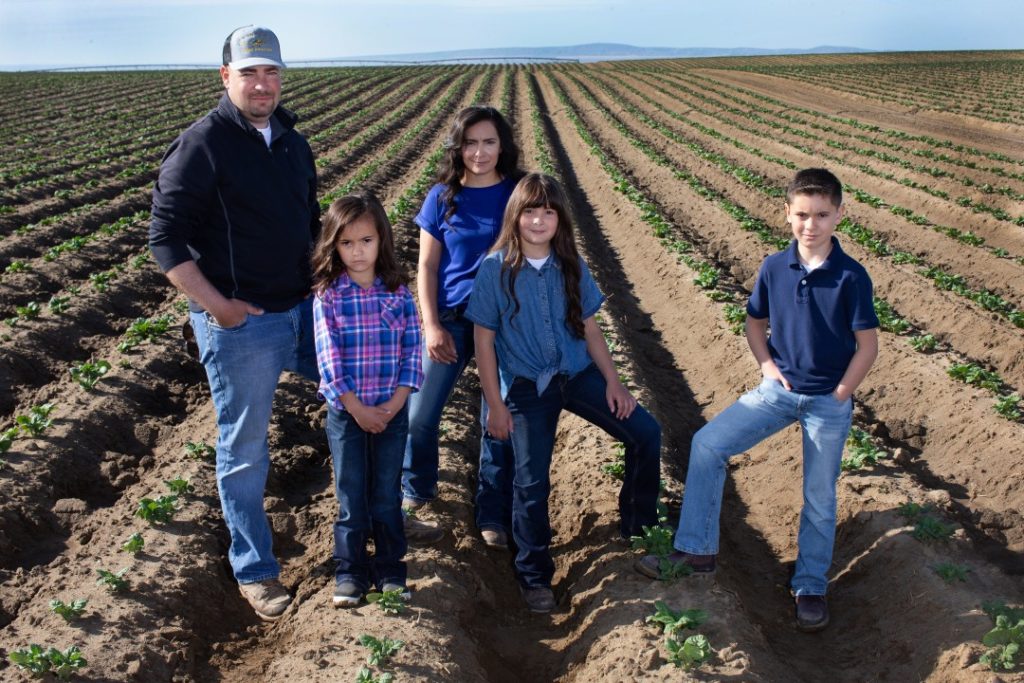 Jordan Reed, left, and his wife, Mia, third from left, own JM Farms. Here they pose with children Breanna, 5, Addison, 8, and Owen, 10, in a neighbor’s potato field in Pasco, Wash. (Karen Ducey / For The Times)

JM Farms — named for its husband-and-wife owners, Jordan and Mia Reed — is facing an extra disadvantage compared to many other potato farmers: They grow only Ranger russets.

The elongated shape makes that “long, perfect French fry” favored by McDonald’s and other chains, Jordan said. But unlike other varieties —including Umatillas, Clearwaters and Caribous — Rangers can not be stored.

When harvest begins in late July or August, they go directly from the field to the processing plants, which run day and night to make them into frozen fries. The farmers even turn on lights to harvest at night to meet the processor’s schedule.

It’s not a hardship, Jordan said. It’s what they love.

Jordan had always wanted to be a farmer and he’d been learning from his father for years. Mia, the daughter of farmworkers, had always admired farmers and their families, the way they shared and worked so close together. That’s part of what drew her to Jordan.

“I’d never seen anybody more passionate or dedicated to farming than him,” she said. 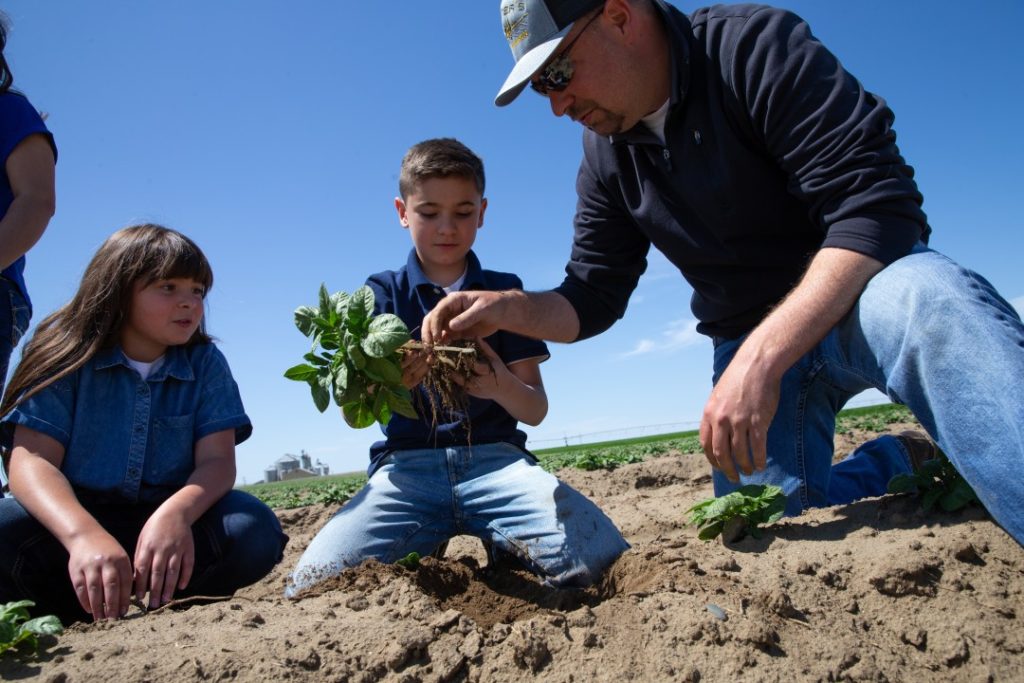 Farmer Jordan Reed, shows his children Addison, left, and Owen how to check the moisture in the soil of a young potato plant in a neighbor’s field in Pasco, Wash. (Karen Ducey / For The Times)

Still, Jordan said he trembled a little in 2017 when he signed their first $1-million loan to grow 300 acres of Rangers.

It was the first crop he and Mia ever grew on their own. They were just 33, with three children under 7, and a lease on his parents’ old farm near Pasco. They managed to make a living — around $60,000, or 6% on their investment after they paid off their loan.

“I tell my wife we invest millions to make thousands,” Jordan Reed said. “We touch a lot of money, but we don’t keep very much of it.”

Last October, the Reeds secured contracts from the region’s two potato processors and a $1.7-million loan to cover expenses. In March, they planted 485 acres of Ranger russets.

Then the processors called in April and canceled 75% of their contracts. They explained that the demand for fries had disappeared and their freezers were full.

Suddenly the Reeds were growing 364 acres of potatoes with no place to go.

There was talk about the coronavirus when he planted, Jordan said. “But we understood people were still going to eat, life was going to go on and we were going to do our part to feed the world. … Now I could very well be put out of business over something I have no control over.”

He’s considered plowing under his potatoes to grow something else — except if he does, he knows he’d lose at least $500,000 because of what he’s already spent on the spuds.

“I don’t recover from that,” he said.

Just down the road, Mike and Davina Pink made a different choice. On Friday, Mike plowed up nearly 300 aces of Rangers after the processors canceled half his contracts. He was gearing up to replant with silage corn, used to feed dairy cows.

The Pinks, who have been farming for more than 30 years, are leaving their 1,300 acres of other varieties in the ground for now.

Mike, the former president of Potatoes USA, is betting he can sell his Caribous because they can be dehydrated and easily stored. And he’s hoping the market will improve by the time his Clearwaters are ready in late September.

Dale Lathim, left, executive director of the Potato Growers of Washington, and farmer Mike Pink watch as 300 acres of Ranger potatoes are plowed up in a field in
Eltopia, Wash.
(Karen Ducey / For The Times)

The Reeds have never raised corn, so they’d need to rent special equipment and hire people with experience. They have decided to stick it out in the hopes the market will somehow right itself before the August harvest.

They haven’t told their children that they might lose their farm. “They love it when their dad takes them out farming,” Mia said. “I know there would be tears.”

So Jordan wrestles quietly with a situation he can’t change.

“You don’t sleep at night, thinking about it,” he said.

“I was raised to put your head down and do your job, that you control your own destiny…. The only thing I can do is keep raising this crop and hope something changes.”

This article by Jeanette Marantos was originally published in the Los Angeles Times on May 3, 2020.

Jeanette Marantos has been a writer for the Los Angeles Times Homicide Report since 2015 and the Saturday garden section since 2016, a yin and yang that keeps her perspective in balance.

View the full article on the LA Time website here.