The Tri-City unemployment rate is bottoming out just in time for the holiday hiring season.

The local unemployment rate dropped to 4.1 percent in September, the lowest level since the current records began in 1990, when President George H.W. Bush was in office.

The local unemployment rate fell six-tenths of a percentage from 2017 and a half point from the previous month.

September is typically a strong month for the Tri-Cities due to the start of the school year, continuing good weather for construction and the fall harvest and field work.

In addition to the usual post-summer burst of activity, demand for workers in healthcare bolstered the job ranks, she said.

Education and health services added 1,000 positions over the year, accounting for 16,700 jobs in September. Government agencies employed 19,600, much for it centered in education, while the administrative category that covers Hanford boasted 11,400 workers.

More jobs played an important role. But so too did a relatively stagnant civilian labor force.

Together, that adds up to 830 fewer people seeking work, helping slash the jobless rate.

Carl Adrian, president and CEO of the Tri-City Development Council, was pleased by the strong employment picture but surprised that the size of the workforce is unchanged. The region’s population is growing and he expects that will turn out to be an anomaly.

Low unemployment is a great sign of economic health, but it does come with its own set of problems, he said. Employers will be driven to relax their experience requirements and open their wallets to attract workers.

But people with jobs means more customers going into the holiday shopping season, which is good for retailers.

Still, retailers could have a harder time filling those posts, Adrian said.

Relief should be in sight. Local unemployment typically begins to rise in late October or November as winter puts the chill on construction and agricultural activities.

From Target to local companies such as Senske Services, a Kennewick-based landscaping business, the virtual holiday help wanted sign is up and running on Indeed, an online job matching site. Senske fills its winter schedule with holiday decorating services and is advertising jobs at $11.50 to $17 an hour.

The Tri-Cities isn’t the only community shattering job records.

Seattle, interestingly, rose three tenths of a percent over the month to 3.5 percent, which helped bring the state unemployment rate down to 3.0 percent. 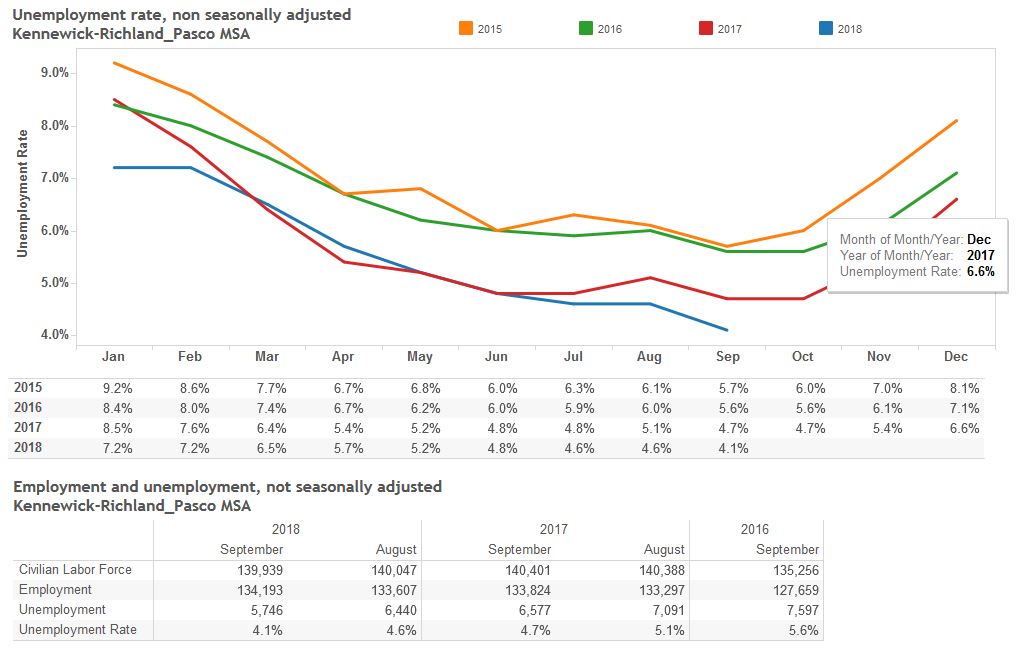