Posted at 09:48h in latest news by Admin
Share

Nearly 2,250 sacks of potatoes and onions will be given out Friday, May 1, to families throughout the Tri-Cities. 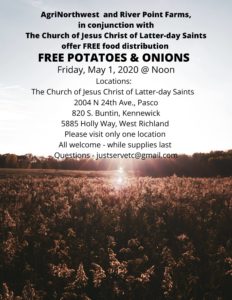 AgriNorthwest and River Point Farms in Hermiston are making the donations with the help of the Church of Jesus Christ of Latter-day Saints, which is managing the distributions.

With the shutdown of restaurants and schools, more than 1 billion pounds of last year’s Washington potato crop remains in storage, leading to worries about the current crop, reported the Capital Press.

The volume of potatoes going to food banks have skyrocketed March and April.

Feeding the Northwest said 1.5 million pounds of potatoes from Washington growers have been among the donations to the food banks, reported the news outlet.

The local giveaways will have 750 bags per location, and start at noon Friday. The sites will remain open until supplies run out. The public may receive one bag per car during the drive-through pickup and are ask to attend only one location.

The giveaway sites are:

This article by Allison R. Stormo appeared in the Tri-City Herald on April 30, 2020.

Allison R. Stormo has been an editor, writer and designer at newspapers throughout the Pacific Northwest for more than 20 years. She is a former Tri-City Herald news editor, and recently has returned to the newsroom.